A few weeks earlier my youngest sister announced she was getting married with her boyfriend and although my parents were terrifically pleased, Dad was worried how he would pay for it... and then suddenly he was flush!

From many, many years ago Mickey Dioro was a horse that Dad used to bet on all the time and would win for him (winning again just this week I was told). He got the nick name from people at the Kafenio he would go to daily for more than 70 years. Most people there only knew him as Mickey Dioro. (His real name was Michael but was called Mick)

When my Dad died recently, all I could think of was a purple sash with white writing and yellow/gold tassel ends. When my sister called after taking Mum to arrange and choose things for the funeral, I told her about my thoughts of this sash and asked her if it was tacky. She said Mum had just chosen the flowers for Dad and they were white roses with purple irises. When they came over I asked Mum what she thought and she thought it was a lovely tribute. 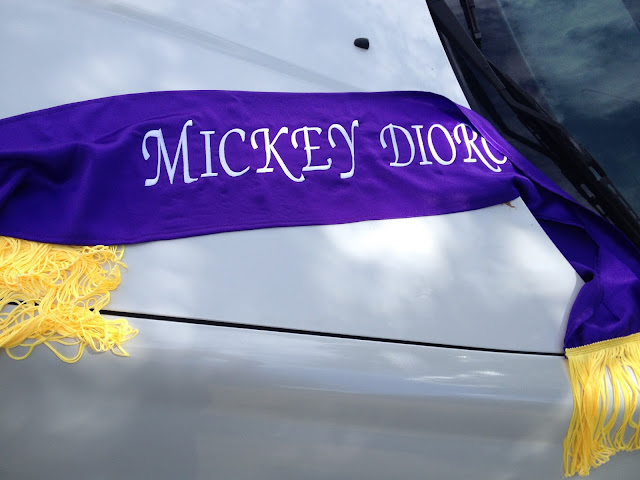 I had used this purple for the lining of a skirt that I wore when the Brisbane Spoolettes went to see "Ladies in Black" (which was fantastic) and I had some left. I showed the skirt to Mum and asked her if she thought it was too 'fluffy' to wear to Dad's funeral and she said that Dad loved purple and black.

I made two sashes and went to ABC Embroidery at West End and they embroidered it for a very reasonable price. When I picked them up it was exactly as I envisaged them. I was so pleased my vision was realised. We used one draped over the casket and it went with Dad. The other we had on the table at the wake where the food was. It looked lovely. Mum has that one now at home. I miss my Dad a lot and it's so hard not being able to see him.

My Dad was 83. He had a hard life being orphaned in Athens after the Second World War. For a time he and his only brother were at an orphanage just out of Athens. It was a private orphanage of a very wealthy couple who could not have children ... although there were many children left with only one parent, they decided to take only children orphaned in the true sense. My Dad very rarely spoke of this only to say once that he felt safe and happy there. Look here for some photos of how devastating and desperate it looked. The only other thing he said once was that he remembers walking to the train station in Piraeus to go to the orphanage and they were turned back by German soldiers saying the train line was bombed. He used to get cigarettes from the Allied soldiers and sell them. That's also when he started smoking at 7 years old. In 2001 he was told he had throat cancer and he would be dead in a year if he didn't stop. He stopped the moment he walked out of the doctor's office. He also gave up drinking for two years. He was 67. Obviously he survived after his one shot at chemo and radiation. He was one of the lucky ones. He was devastated (as we all were) when one of my younger sisters was nearly killed in a car accident in 1983. She had horrific injuries and a halo brace for a broken neck and she was in a coma for 4 months. My sister was in hospital for 18 months then did 5 years of outpatients at the hospital every day. A few years after he survived the cancer we found out my father had asbestosis and that it probably caused his throat cancer. Of course, like many men his age, he also had prostate cancer. A few years ago he was diagnosed with dementia. The disease that robs you of your mental life and then takes your body too. We were so lucky that, although it was a terribly difficult 2 or 3 last years, for the most part my Dad still remembered us all till the end, could eat and drink and walk around. Those who dementia has visited will know what a blessing this is.

Thanks for indulging me in talking about my Dad for a bit. Thank you so much for all your kind words and thoughts in the comments on my last post.

My thoughts to all of us that have lost loved one.

Patricia said…
What a beautiful tribute, and I am so sad for your loss. The purple iris is a beautiful bloom, and what an inspired choice to use them with the white roses. Thank you for sharing your story and all the best.
26 March, 2017 21:45

McVal said…
I'm so sorry to hear about your loss! What a great tribute to him.

Sue said…
So sorry to hear of your Dad's passing. My Dad just turned 83 and has fibrosis of the lungs and is going down hill very fast (a sad coincidence). It was lovely to hear about his life and your love for him shines in this post.
07 April, 2017 09:37