The pineapples will not beat me... although they did try. 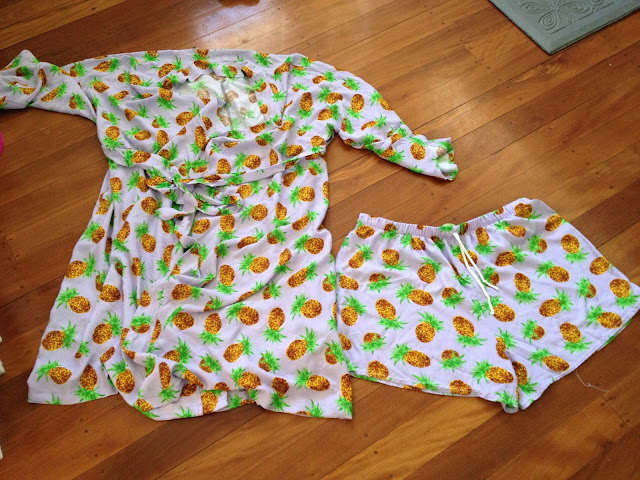 So that's the finished product. Kimono and sleep shorts (or maybe they'll be beach shorts? Who knows? When I made my pineapple skirt, my niece loved the print and asked if she got some would I make her something. Of course I would.. I love making things for my niece as she appreciates the time and effort involved. Although, this wasn't to be much effort - ha a kimono style, light dressing gown - how hard is that! What could go wrong? 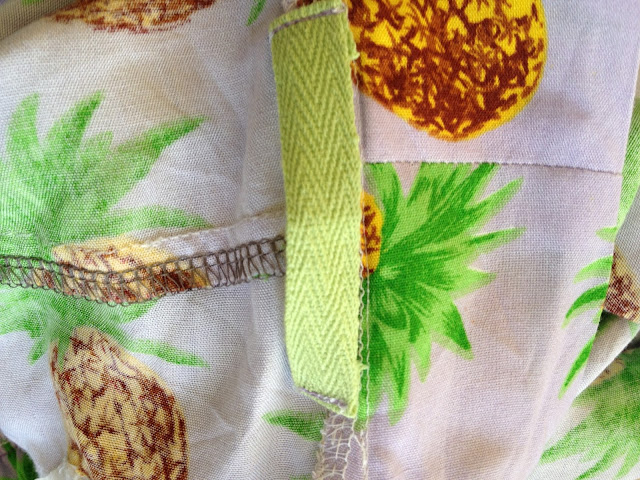 This is just a cotton bias tape hanging tab. I hate not being able to hang things and the cotton bias tape is soft and cotton and I have it in three useful colours. I didn't have a kimono pattern so just used the McCall's dressing gown pattern I used a few weeks ago and adjusted the pattern to cut some kimono sleeves on. Easy. Hope it fits well. I have put some belt tabs on - three as I hate when the belt falls out of them. I think it will need an extra tie in the inside but I'll get my niece to tell me where she wants it when she tries it on. She's back from her work tour tomorrow evening. 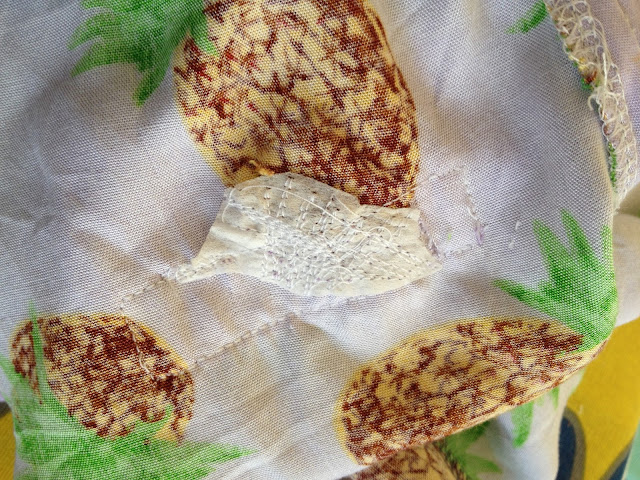 Boy this was a never ending story though. It really tried my patience. After putting on the band around the front and neck, I overlocked it and I managed to snip a bit mid top back. Drats! What a pain. There was so much soft, floaty fabric and not much room around the overlocker but I was really trying to keep it all out of the way. (I've done this one before on a red satin ball gown that I was to wear to a "party like it's 1999" ball because it was NYE 1999 but it's still sitting unfinished because I caught a snip and it was the day before NYE so I gave in and went and bought a dress - which was a lovely, long, black beaded dress that I got for a steal and I still have. I'll eventually finish that dress but no hurry as it wouldn't fit me at the moment anyway ;) ) So that's the 'repair' I did. I put some fusible interfacing on the inside and sewed over the 1 cm V snip. It was pretty invisible but I still wanted to disguise it. 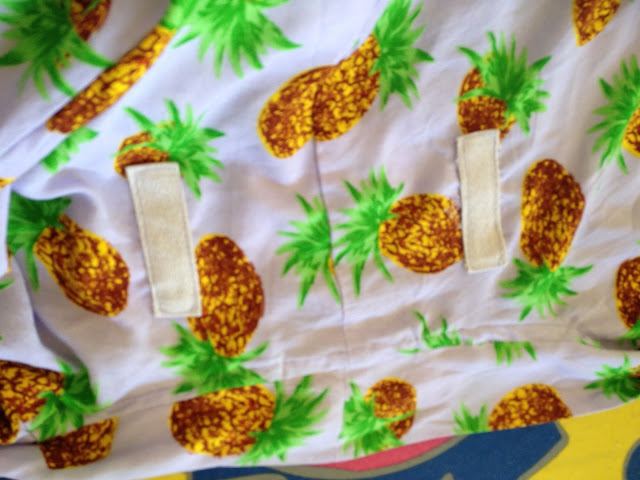 I found this large cotton bias tape harvested from some pants that died so I put two tabs on and great, you can't see the snip. Then I went to trim the final thread from putting the bias on and then 'snip' I cut a tiny snip in the fabric again. ARRRGGGGHHHH!!!! I was ready to toss it in and go and buy some more fabric and just start again but Trad's, where we bought the fabric has moved about 45 minutes away so I decided I would persevere.

And persevere I had to because that wasn't the end of the woes. I decided I would use some elastic that has the cord threaded through it on the waistband. I positioned where I wanted the button hole to go for the cord to thread through, I reinforced it with some iron on fusible and made my button hole. I made a test one - perfect. Set it up, made the button hole and it stopped half way. So I pulled that one out, no mean feat in soft rayon they made another one. It went crooked. Argh! I pulled out the threads gently which took forever and then put the shorts away in the naughty corner. Then I went back to the kimono to finish hemming and the sleeves and got it back from the naughty corner a few days later. Thank goodness the button hole went smoothly. I overlocked the elastic on the waist and flipped over to sew it down. Wow, I'll be so glad when this is done I thought to myself - ha. Would you believe that I had to change the top thread twice and the bobbin thread 3 times for about 90 cm of sewing. I was so glad it was done. Some things just do not want to be made or are just resistant for some reason but I am tenacious if nothing else and I would not be beaten by pineapples. Anything beaten you lately - or tried to?

This isn't the end of the pineapples either. I have some my niece bought in a black colour way for elastic casual pants for my Mum. In the meantime I have finished a dress that's a bit of a mash up and save. That'll be next. 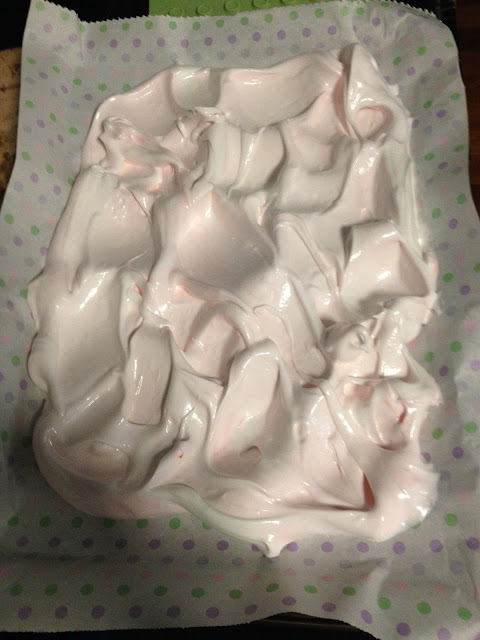 Finally, Happy Mother's Day for tomorrow for all the Mum's out there. This is the pink tinged pavlova that's in the oven as we 'speak' getting cooked for lunch at my sister's place tomorrow.

McVal said…
OH I HATE that when you accidentally snip something in an obvious place. WAY to save the day!
And is pavlova like a pudding or meringue? I feel like I could eat that up in a snap...

Summer Flies said…
Hi, pavlova is a meringue then you cover with cream and fresh fruit - musts in the fruit department is passionfruit, mango and banana (unless you hate them of course). I normally make mine flat and not too high as I like mine crunchy but some people like them marshmallowy on the inside and crunchy only on the crust so they make them deep like a cake shape. I also don't dress them in the cream and fruit anymore - I just whip the cream and have lots of fruits chopped and berries and then people put how much cream and fruit they like. It's yum - you really have to try it.
11 May, 2016 13:01