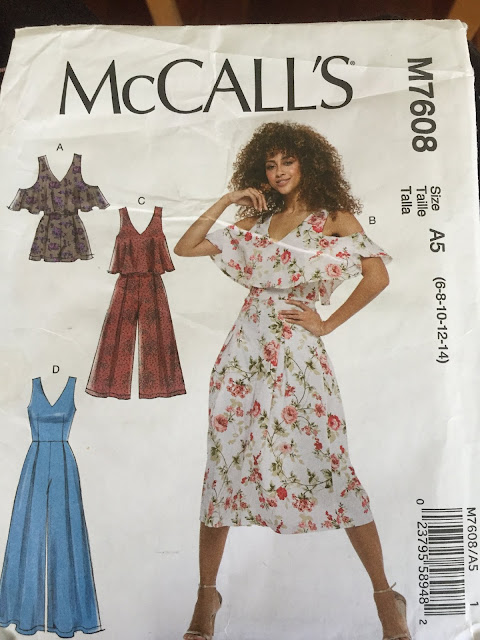 Well it's that time of year again. Brisbane Spoolette's High Tea - it is usually on around my birthday date so it's a great double excuse for a nice outfit and a cocktail.  I chose to make McCall's 7608. Originally it was View D but with the shorter legs, but I forgot and cut out the long legs so I stuck with it as I figured if I don't like them I'll chop them again. As it was I cut off about 10cm from the bottom and that was just enough. Now this pattern was one of the ones that my friend brought back from the States for me when she was living there (they are living in Europe now). So I would give her a list of wannabe patterns and she would get what she could in the $1 and $2 sales. When I saw this one, I was "huh? what was I thinking". Plus it takes a lot of fabric and I usually buy fabric I love and then match it, so it's usually 2-3 metres only so when I found this fabulous hot pink fabric at the Maroochydore 2nd hand shop and it was 4 metres at 140cm wide, I knew it would be this jumpsuit.

I actually made a toile of this outfit, but it was from a thinner and more stiff fabric and that led to some problems. 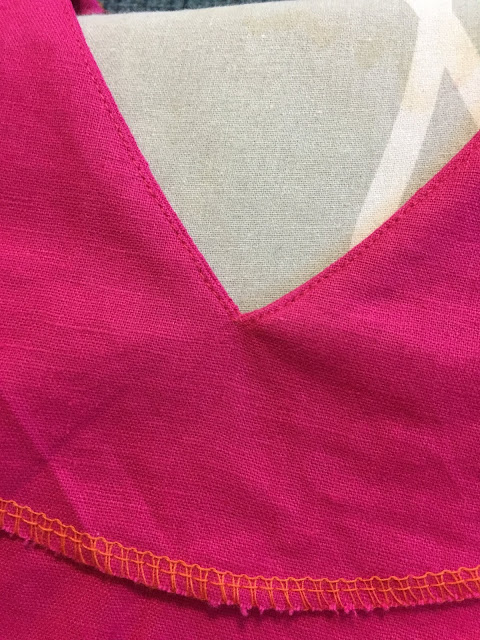 I had orange thread in the overlocker for a gift garment I'll post up next (it's great, and I'm going to make me one too I love it so!),  and I had no hot pink but I love orange and pink together so didn't bother getting more pink.  But look at that point at the V! So pleased with that. Followed all the rules and it worked perfectly. 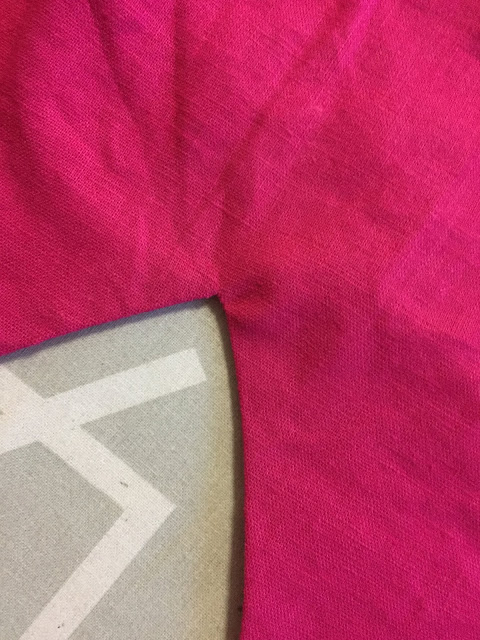 Here's the outside of the point. Nice!
So, the High Tea... I have a friend who I know from my son's 1st year at primary school where now, we are so busy we catch up here! 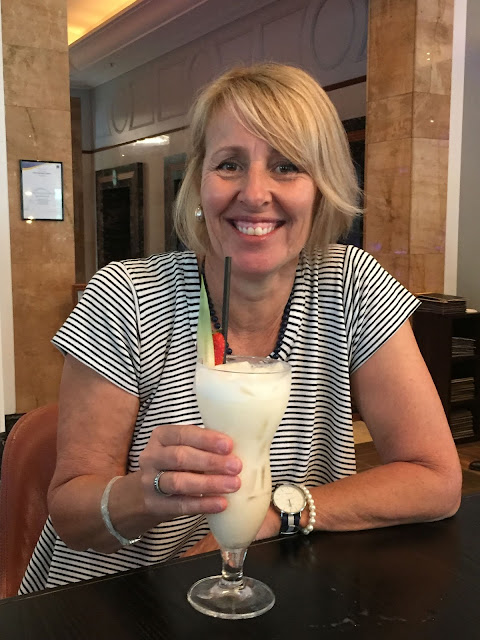 My other friend Kim got to her first Spoolette event and we started with a refreshing cocktail. 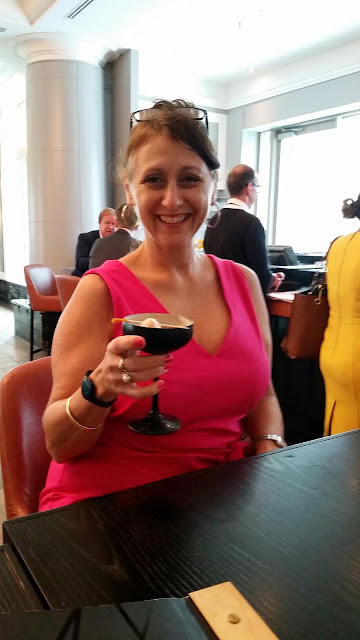 One for me too. 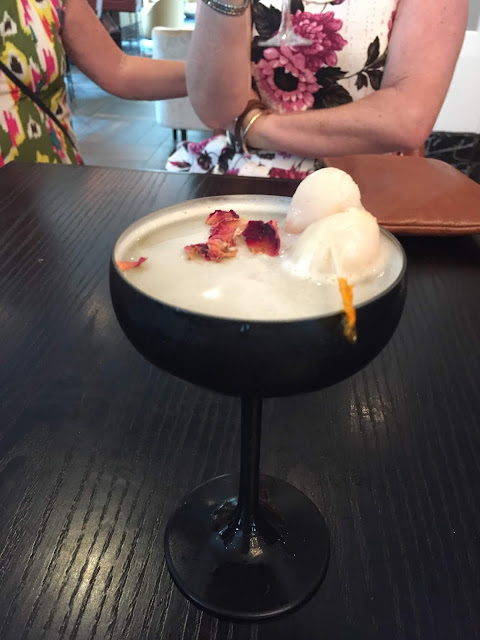 It was yummy and very pretty. 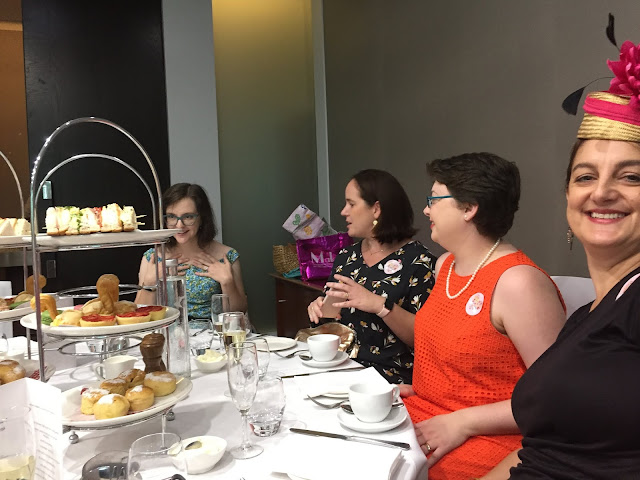 In the foreground is my friend Sarah.. she made her hat, which was fabulous and with a zip as the swirly embellishment... plus perfect match for my jumpsuit! I'll be asking to borrow that if I ever need a hat for the Melbourne Cup for example. 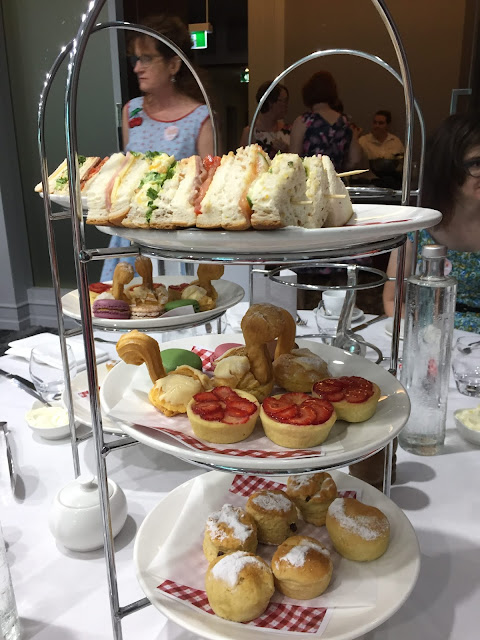 Yummy food, 62 women who love to sew, a glass of bubbles, tea, coffee, fabric swap and just all round fun. The standard and range of clothing was fabulous this year. I loved everything.  In that photo above, in the background you see Kerry, who when we notice each other said, "oh it's you, I didn't recognise you with your clothes on.". The people  nearby were a bit stunned, but we knew what we meant... we know each other from aqua aerobics at the night classes. Kim above if from the day classes. Worlds colliding! 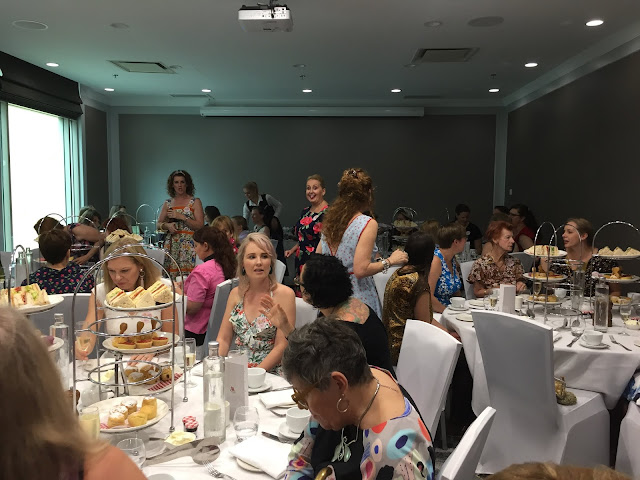 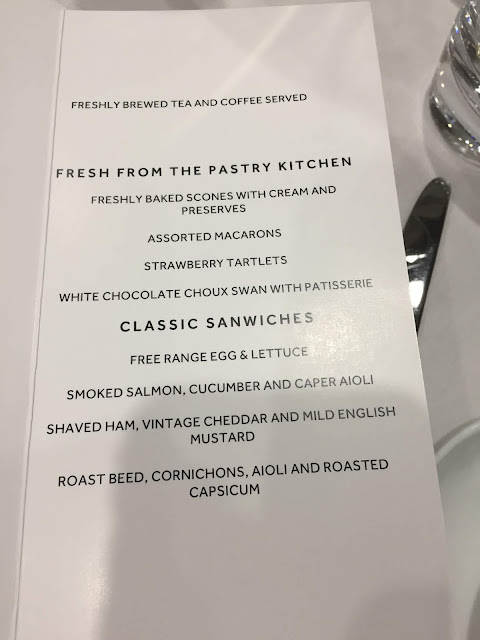 Menu with added bonus words: The classic SANWICHES (sic), the roast beed (sic) was my favourite! 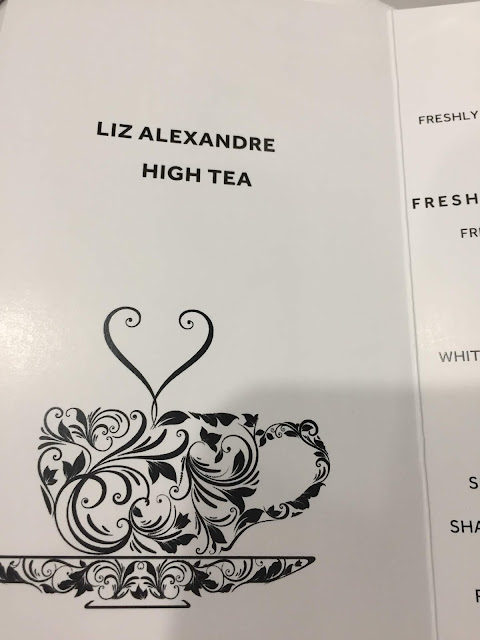 First time I think we've had a printed menu, which was quite pretty and entertaining! 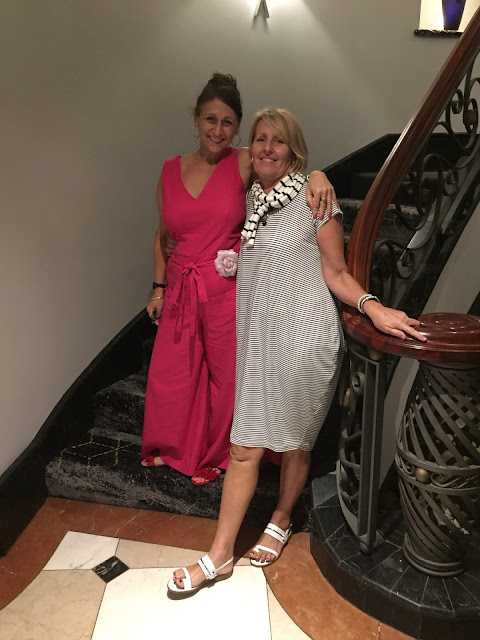 Just as we were leaving we thought we'd get a photo at the beautiful staircase. Thanks to Liz for organising this event for the 6th year.


So, just a few words about my jumpsuit. It's very comfortable. I put in an invisible zip that was red as I had no pink.. this is a stash outfit all the way. As I said I did make a toile, but my fabric, which I think is a ramie or cotton or a mix of both. It's very linen like but doesn't wrinkle quite so much and is very soft and comfortable. It seemed to grow during the day and by the time I got home the straps were falling off. (I do have tiny shoulders). I didn't fit the bodice terrifically well as it's hard when you are by yourself, but I think I'll shorten the straps a bit and widen the front darts, which will allow a small pleat in the front which is completely eliminated on the current iteration. This should fix up the waist and shoulder length that has grown, but firstly I'll give it a hot wash and see if it shrinks a bit. All else fails, it's a quick sew and I've got heaps of fabric and I'll give that one to my niece.

Up next the orange gift.

colesworth said…
I didn't realise it was your birthday! happy birthday! Your birthday suit was awesome ha ha ha ;o) Always such a great day - you got some good photos too.
02 April, 2019 14:41

Patricia said…
Happy Birthday! I am so sorry I missed the high tea, and your gorgeous pink jumpsuit. What a great sew, and very nice for the occasion. The tea looks really fantastic, and I hope I get there next time, however there is always Frocktails to aim for. So funny the roast beed sanwiches. xx
02 April, 2019 20:42

Vanessa said…
Happy birthday! You looked wonderful in the jumpsuit, and the event looked like so much FUN!
04 April, 2019 00:00

I had a plan. I would take off one cover and have the other one for reference. The other rule I had w…
5 comments
Read more

February 02, 2020
Hi, Happy New Year! We've been back from our trip nearly 3 weeks and no sewing has been done. It rained a lot while we were away and the grass in our back yard went from brown and crunchy quite literally, to green and lush but long. The grass has been cut 3 times already and needs it again.

So, as I haven't any sewing to report, I thought I'd talk about how some things have proved their worth.

Firstly,  the couch covers I made last April for my old couch. I made these covers very cheaply. The fabric was $4 per metre and a very light colour. Before I made them I cut a test piece and marked 10x10cm to throw in the wash to see how it would wash and if it would shrink.

It washed well and didn't shrink at all... good old synthetic. I just took the cushion covers off to wash them this weekend and I'm happy to say they have washed up perfectly. They haven't faded over the last 9 months although I noticed a light stain that didn't wash out but when I do the again …
1 comment
Read more