So years ago I bought a second hand couch. It was quite new but I think the woman that owned it had dyed her hair and leaned back and it left a bleached spot on the back. I covered it with a throw but I really hated the colour and the spot. East Coast Fabrics had a half price sale for upholstery fabric in March and I decided I would cover the couch. 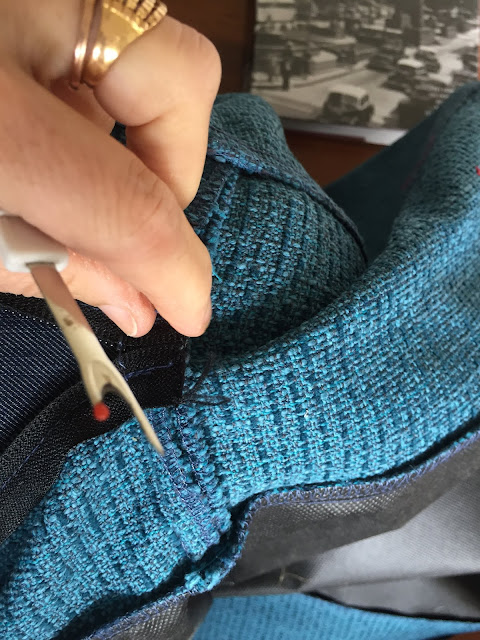 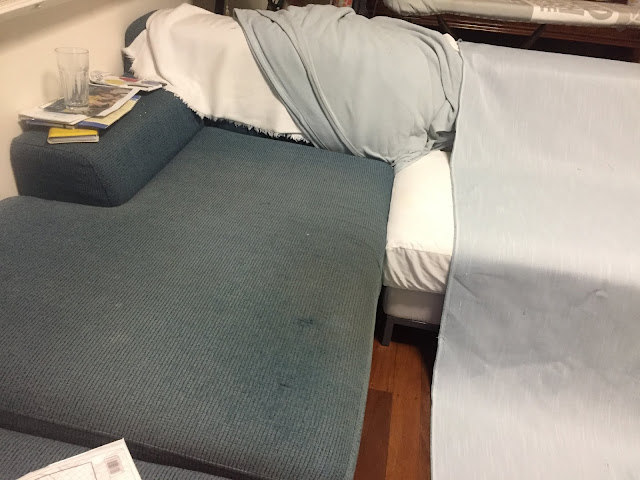 I had a plan. I would take off one cover and have the other one for reference. The other rule I had was to put the pieces on the roll of fabric right side facing up. I also had to keep it to the same grain as the original pieces were too. I had taken a week off for school holidays with my son and I took an extra week off to finish my couch. Unpicking took so long and I  did it watching tv at night time before I was ready to cut and sew. That's the ugly cover above. So faded and worn out.  The roll of fabric is unfurled over the other couch and the cover is off that one. 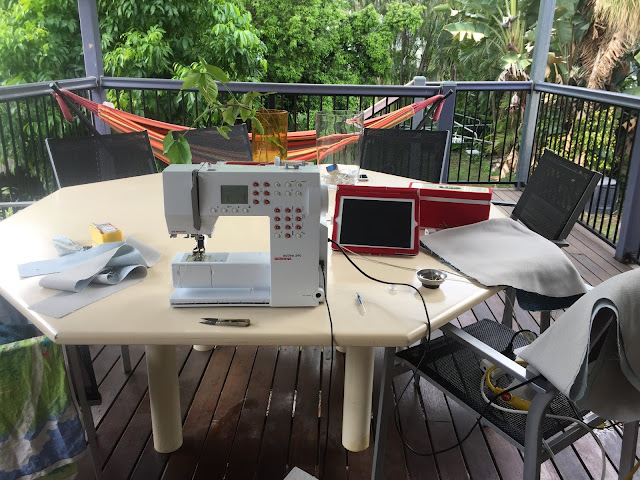 As it has been fabulous weather here (2/3rds of Autumn is over and it's still 26 degrees c) and as I thought when the whole piece is put together it would be huge, I decided I would set up outside on my outdoor table which is a huge octagonal and it was very pleasant. I set up my iPad with a speaker and Nick Cave Live in Copenhagen playing (it was a free stream for a few days over the Easter Holiday- a gift!) Such great light out here! Alas, after the first day I had to set up at the kitchen table as it started raining and so hard the mist from the rain would wet my machine. 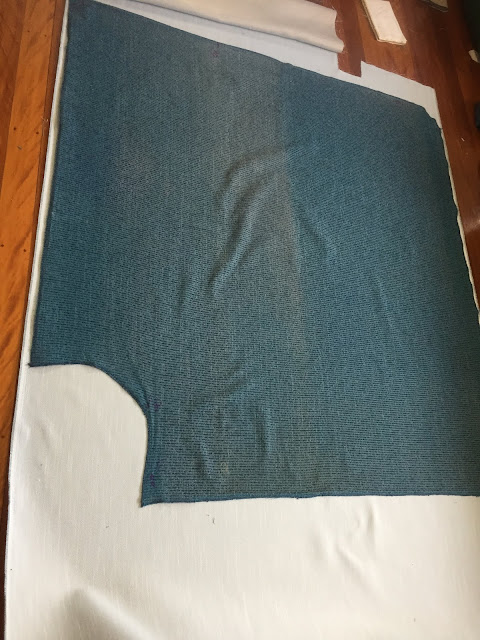 This is a piece that covers the back and fortuitously it fit across the fabric. In fact I did want it the direction of the marle to go the other way as that was the grain, but I went to a local upholstery shop to get some thread (last reel left at a very reasonable price) and she advised that it was perfectly fine to put it on the other way.  Great advice. The colour looks very washed out here.. it's actually a lovely light blue. I did a burn test and think it is a high cotton content with synthetic mix. It has a lovely feel. 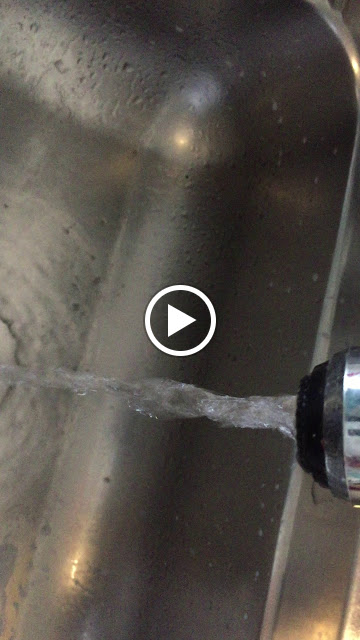 I had some scotch-guard spray from spraying some shoes and did a little test on the fabric. I mean it is light blue and I have a teenage boy.  In the video above you see how the fabric reacts before and after treatment. Test proved it was worth spraying it. 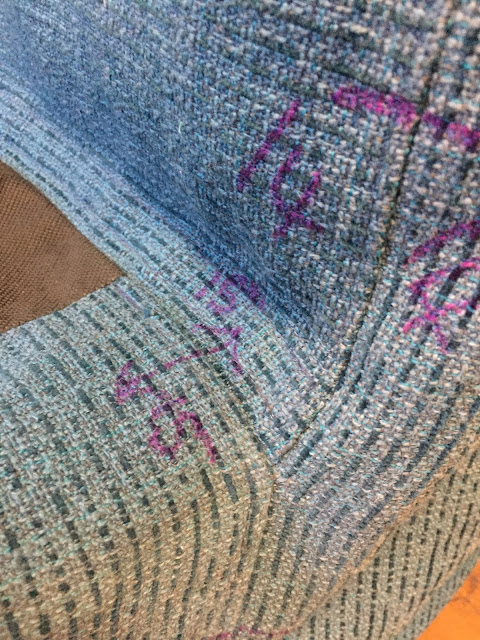 I marked things on the old cover for reference and took photos... ha, no going back now! 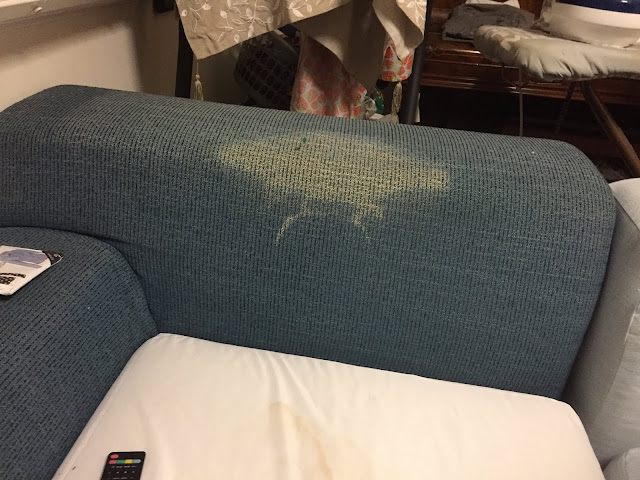 There's that ugly spot. I did get it very cheap and it has proved to be pretty sturdy. 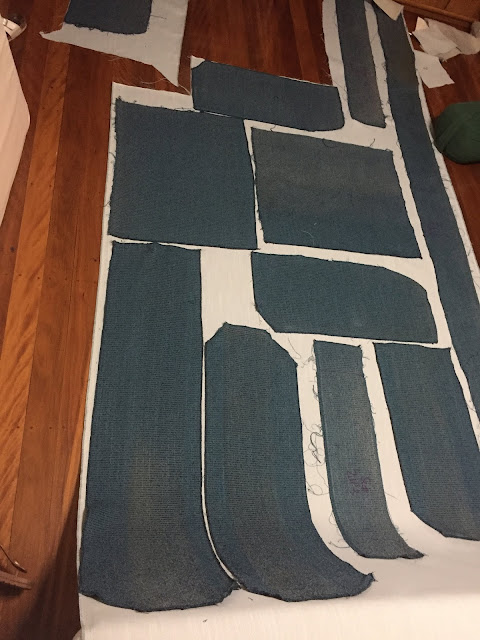 I lay out the pieces to get the most out of the fabric. I bought 14 metres based on ... nothing more than I knew I'd need more than 10 metres and that's what was on the roll. So considered! 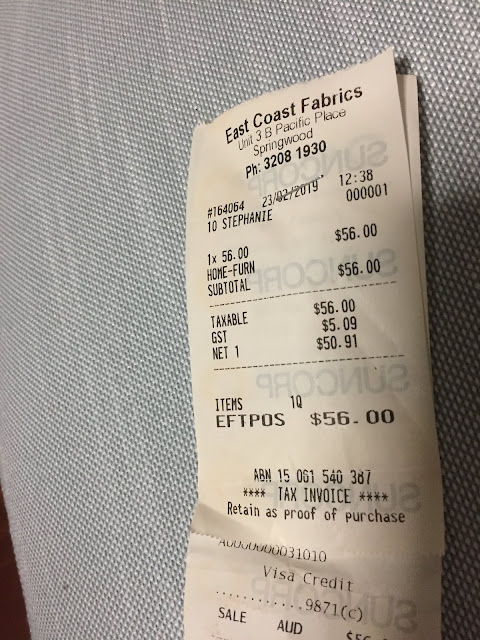 The fabric was half price and I got this at $4 per metre and got 14 metres = $56. I ended up using 3 1/2 spools of 100 metres Guterman Upholstery thread at a cost of about $35 and 2 80/12 Mettler needles. I took my time... I mean I was on holiday so I went to aqua aerobics but basically stayed home and did my sewing. I have to say, overall I really, really enjoyed sewing this which surprised me. I thought I'd find it a chore, but I didn't. Maybe the fact I had the time set out, my son was at his Dad's so no stopping to cook or making sure to tidy things up. I probably worked on it about 5 hours a day for 5 days. Physically I had to pace myself.. I have neck and shoulder injuries and if I'd overdone it, it may not have been finished. 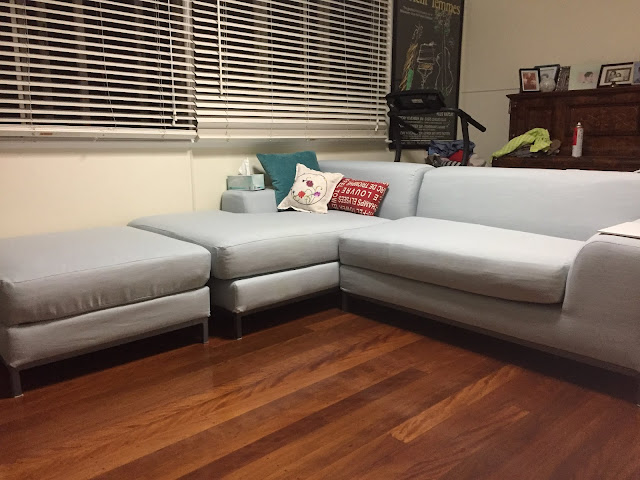 Finished product. It's not perfect but it is good. I love the colour and the way it's made the room fresh and bright. The trickiest bits were some little boomerang godets at where the arm meets the back and the attached cushion ottoman. I watched some tutorials from The Funky Little Chair which I found really useful and fun, plus I found them really clear and well done. I am so pleased and now don't feel any urgency to get a new couch. I did look... I tried to spend money, but they are so expensive and I haven't found anything I really liked so as a friend said, better to have something you don't like that doesn't cost you $2000! 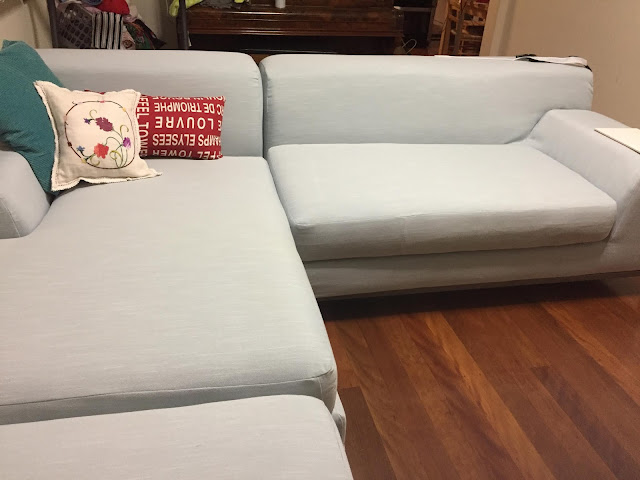 That's probably my biggest challenge and I'm really chuffed how well it turned out. Anybody else make something similar? Would you ever give it a go?

KS_Sews (Dressmakingbacles) said…
WOW! That is such an impressive undertaking!! I have two desk chairs that I keep thinking about painting (legs) and recovering. Maybe I'll take the plunge eventually :)

JustGail said…
And chuffed about this project you should be! Well done - I've considered smaller reupholstery projects and only got to buying the fabric. It's been so long, I no longer like the fabric. In fact, I no longer have the chairs!
30 April, 2019 23:36

Audrey said…
Great looking couch. You should be very proud. I have a few slipcover projects waiting for me. I think your approach was the best. Dedicating a large, relatively uninterrupted, chunk of time to the task.
02 May, 2019 08:11

October 25, 2012
Has anyone used Lekala patterns? There are some seriously great designs there and they are so cheap and they fit to your own size. I mean look at those dresses... I love that one with the folds and that top jacket is just dreamy. The coat at the bottom - just simple clean lines. I'd love to hear if anyone other than Tanit Isis Sews  has made any I'd love to hear how it went. Oh... I have my last lecture and tutorial for this year tomorrow and in two weeks my first (of four) exams... but on the 13 November at 7.30pm I am finished for this year!(But who's counting??)
17 comments
Read more

February 02, 2020
Hi, Happy New Year! We've been back from our trip nearly 3 weeks and no sewing has been done. It rained a lot while we were away and the grass in our back yard went from brown and crunchy quite literally, to green and lush but long. The grass has been cut 3 times already and needs it again. So, as I haven't any sewing to report, I thought I'd talk about how some things have proved their worth. Firstly,   the couch covers  I made last April for my old couch. I made these covers very cheaply. The fabric was $4 per metre and a very light colour. Before I made them I cut a test piece and marked 10x10cm to throw in the wash to see how it would wash and if it would shrink. It washed well and didn't shrink at all... good old synthetic. I just took the cushion covers off to wash them this weekend and I'm happy to say they have washed up perfectly. They haven't faded over the last 9 months although I noticed a light stain that didn't wash out but when I do
1 comment
Read more

Special silk dress and a 50th

May 16, 2020
In 2003 I made this Burda dress (6/2013 #105).  I've seen this pattern as an envelope pattern about 6 months ago so look out for it if you like it (although I know it was old and probably out of print). It wasn't a style I thought would suit my pear shape, but I'm surprised how flattering I think it looks. I made it out of this nice quality polyester which I picked up at a Brisbane Spoolette's High Tea and I really love it still. It's makes me feel great when I wear it.  A few years ago (ok many - 2012 in fact) my beautiful friend went to Vietnam and thought to bring me some silk! What a friend. She has amazing taste and bought me 2 1/2 metres of a white and floral satin silk. For the first 5 years after she kept asking me if I'd made  anything with it, and in my head I had made about 100 things but nothing was quite right. She stopped asking then.  T ruth be told I wanted to make this same Burda pattern but decided in my head it wasn't enough
6 comments
Read more