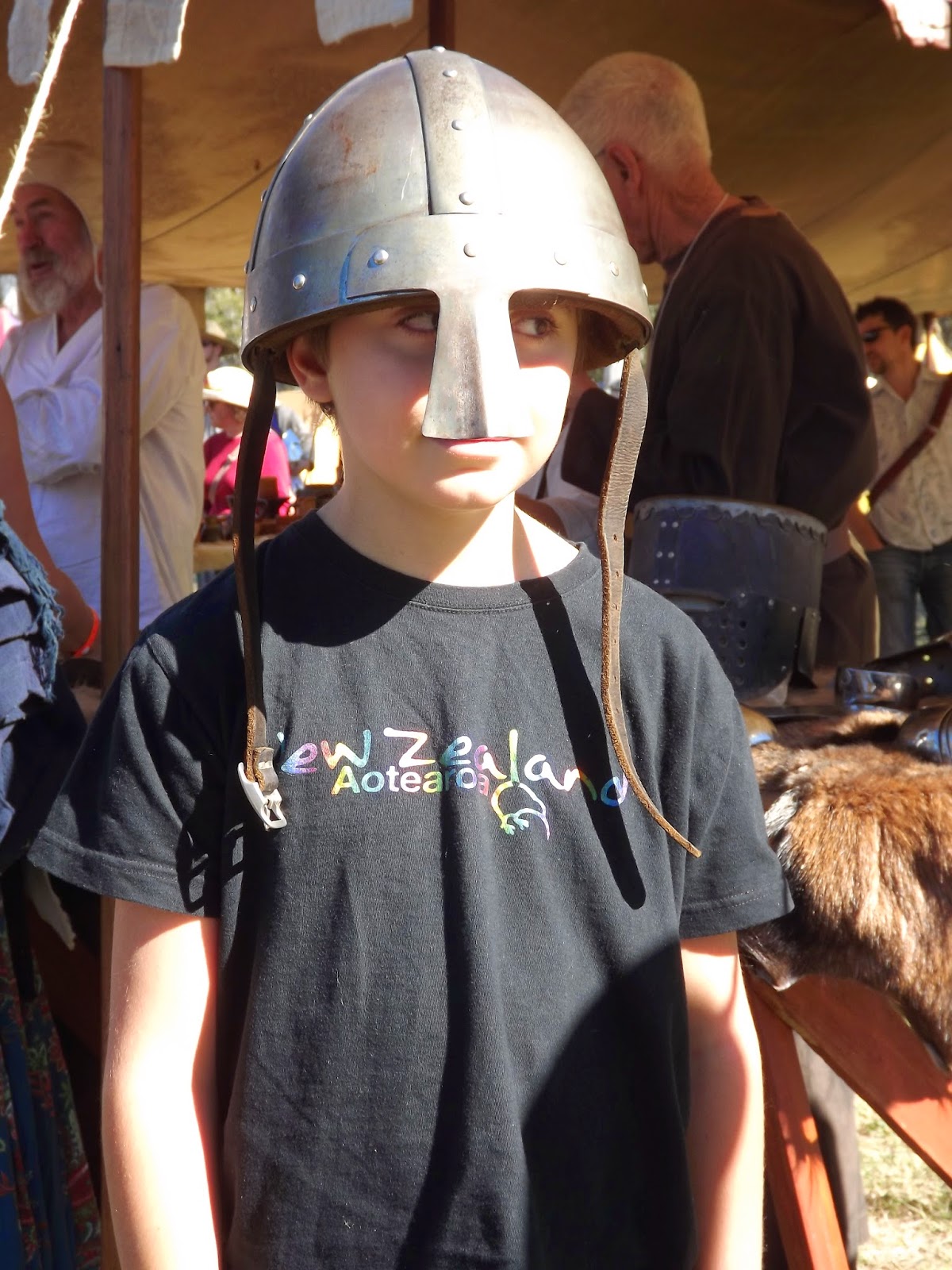 Last weekend we went to the Medieval Festival at The Abbey on the Bribie Island Road just 40 minutes out of Brisbane. This is the first year I have had my son on the weekend that it was on so we went on the Saturday. (it is on for two days for the public). It is such a great day/weekend. There are set ups from different eras by devotees - I think these devotees stay a few days or a week there and set up a living arrangement like it would be in their particular era. There are living quarters, cooking quarters for the re-enactment people and display tents for the public - this is for selling items and also for highlighting their skills and artefacts.

A few things I really, really appreciated was that this was a very inclusive festival. When my son was young I took him to the many mini train displays, and like many youngsters he wanted to touch and play with them. Now I know there is a lot of time and cost involved with these displays, and it is mostly older men who put the time in, but there wasn't any touch and play displays it was just a look  at day, and the men often got cranky about the kids touching no matter how many times you said "don't touch" or " touch with your eyes" (as if that isn't confusing for a 4 year old!).

Here the purpose of the display is for festival goers to touch, try on, play with the helmets etc, watch people making things (wooden swords, copper beating, silver jewellery moulding etc). People are friendly and inclusive and inviting. 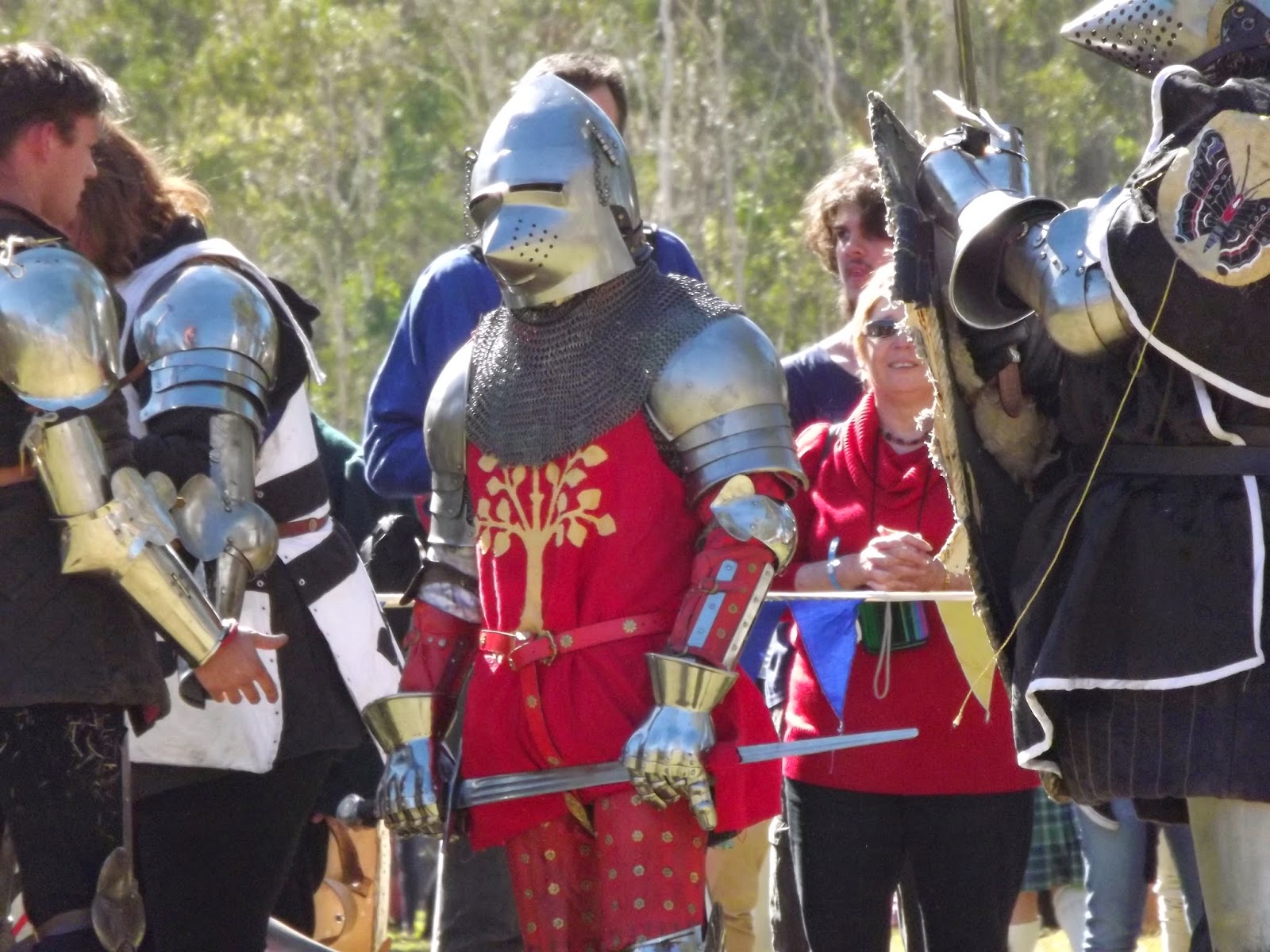 There are loads of displays all day of knights fighting.... Testing out one of those displays.... 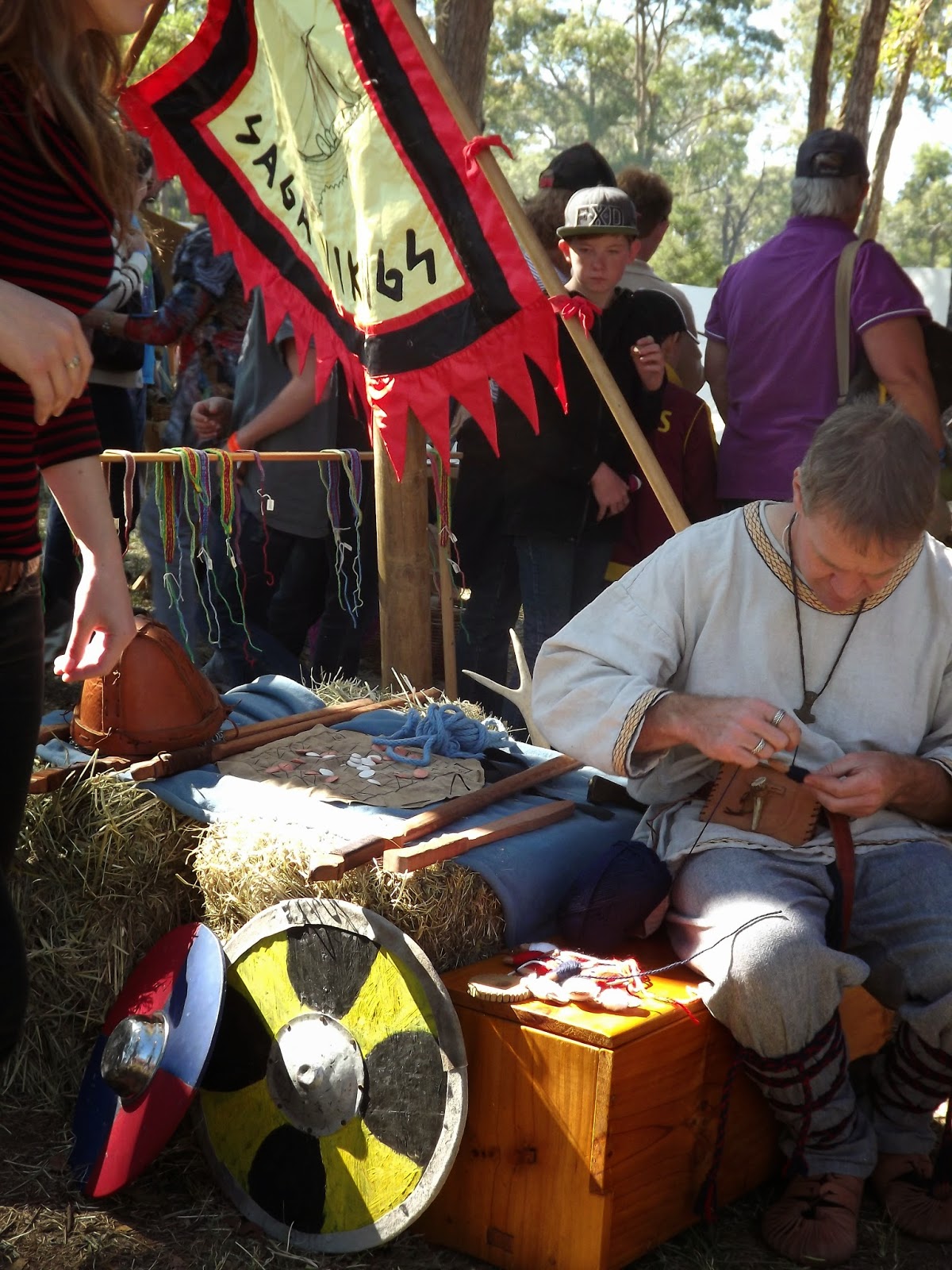 Here, this guy was making a leather pouch, he made his leather shoes (and made more later) and the wooded swords (3) I had to buy for my son and nephews (perfect for the cloaks I made for them a couple of weeks ago). (see the swords to his right). 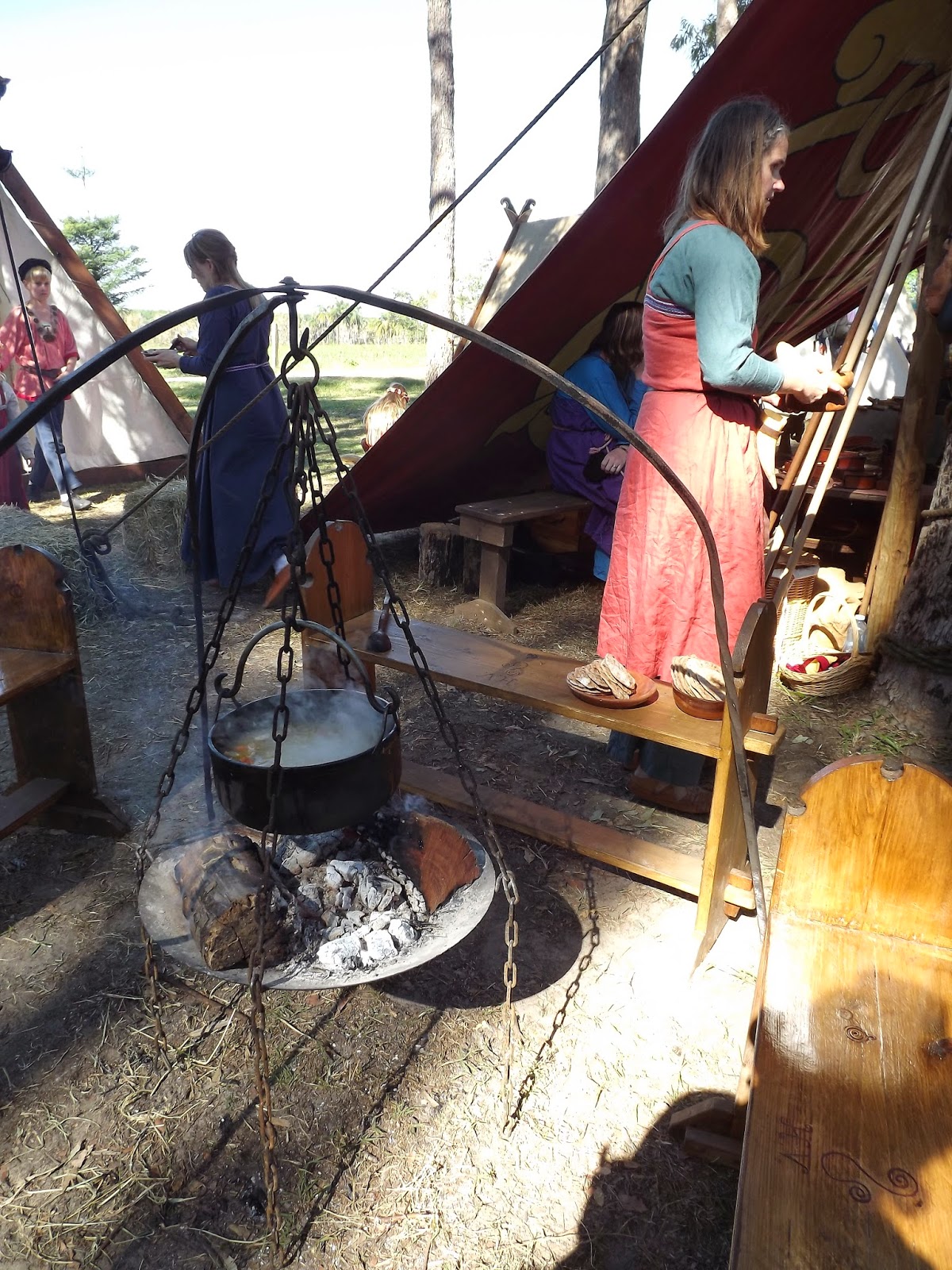 This is a fire with a stew/soup cooking for the participants lunch... smelled great... and some of the living quarters for those staying longer. 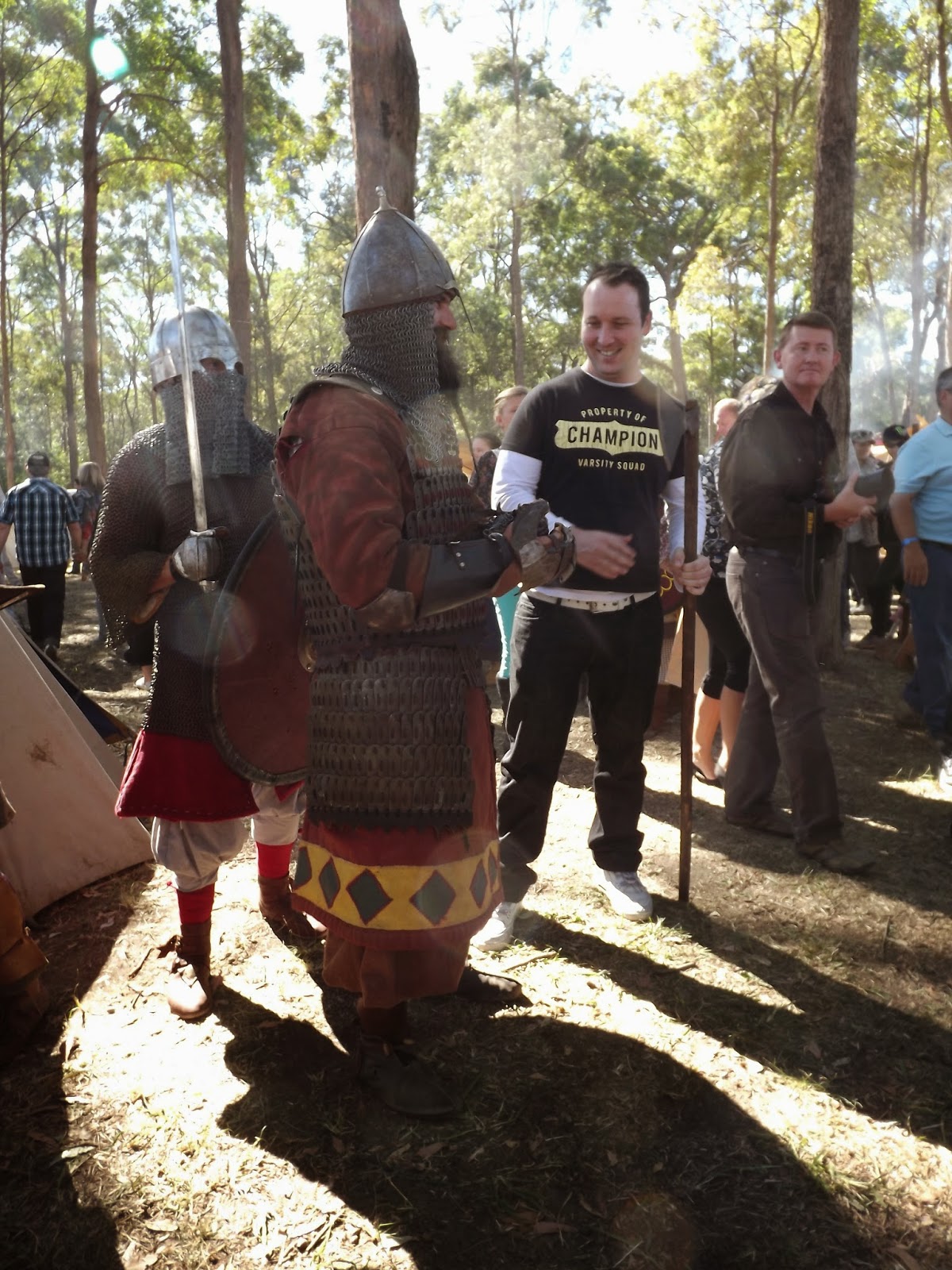 The costumes are amazing and of course they make them all themselves. It's a real lifestyle for some. 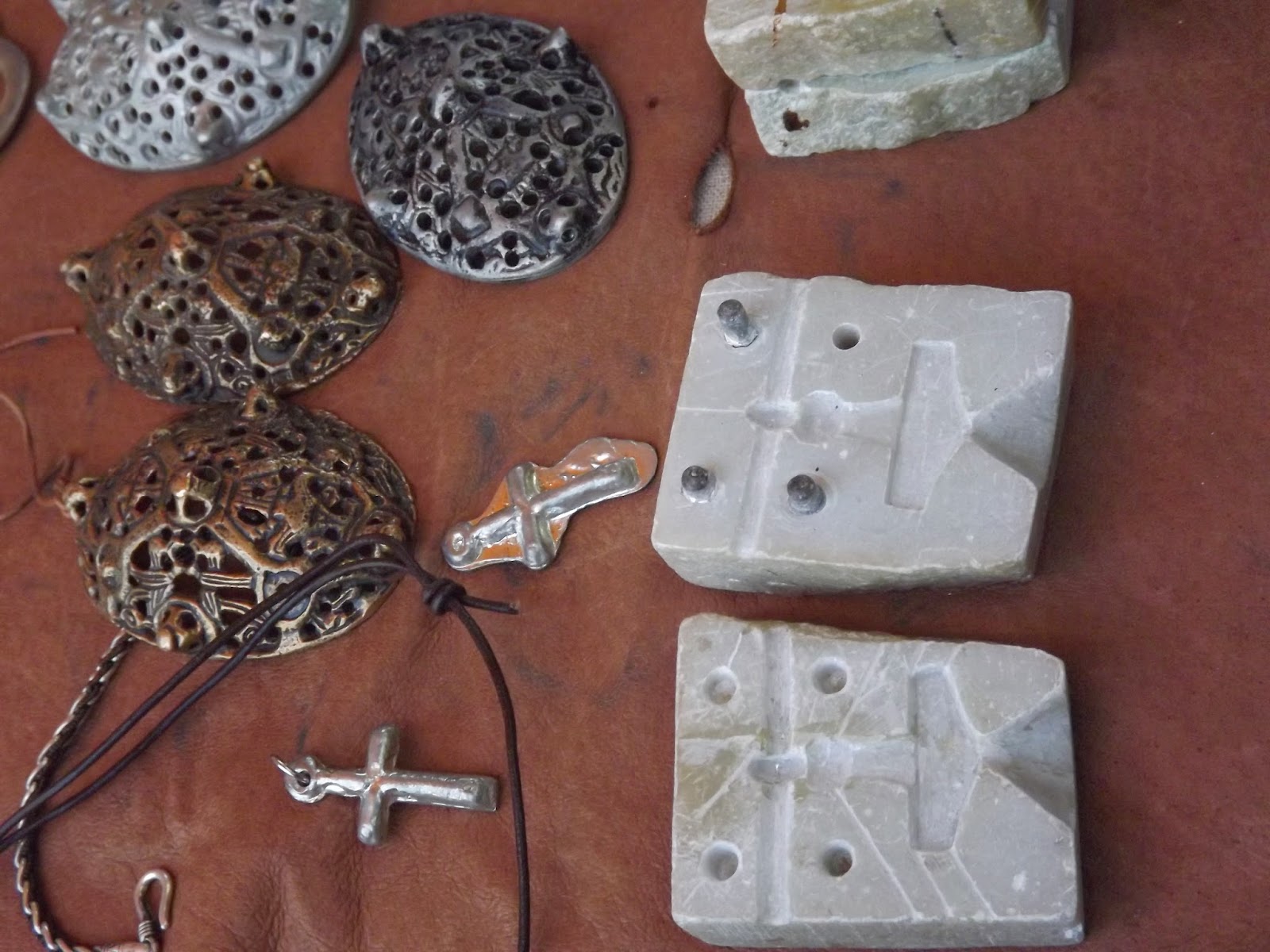 I loved this... this display had a lot of jewellery and this display of how they made the silver cross. They were very encouraging to touch and inspect closer. 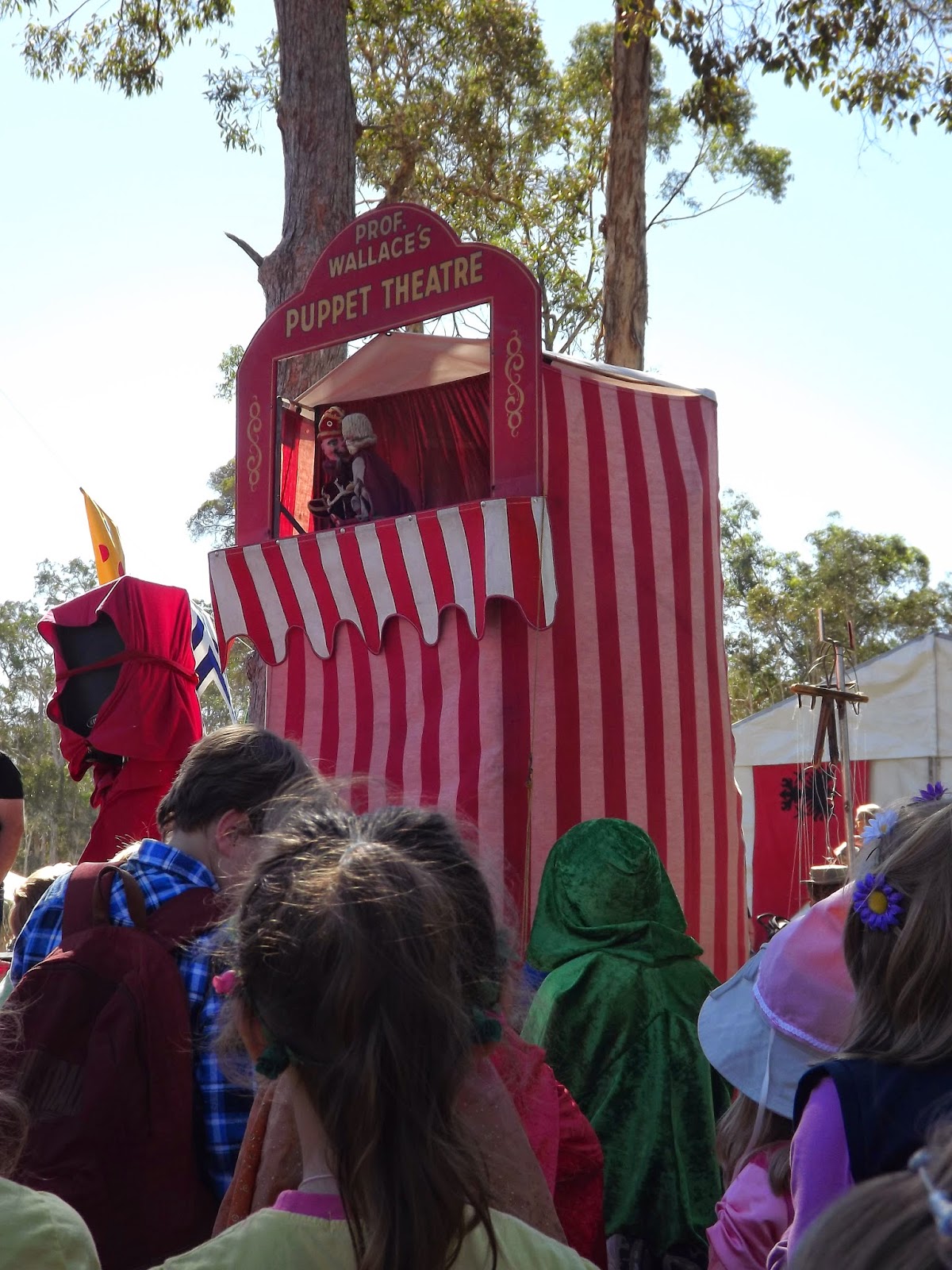 There was also a Punch and Judy show which was well supported and LOTS of fun. 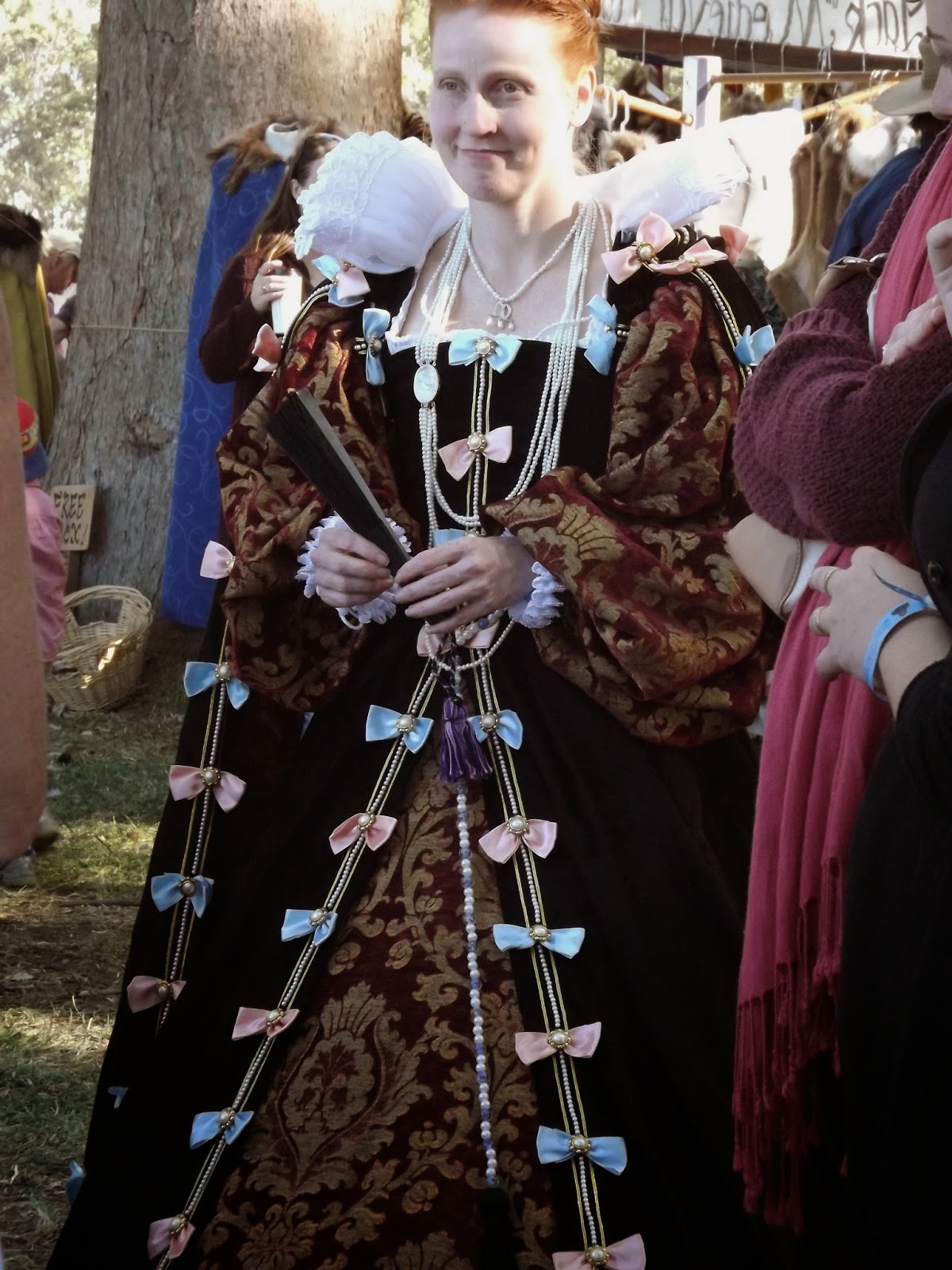 One of the very ornate costumes... 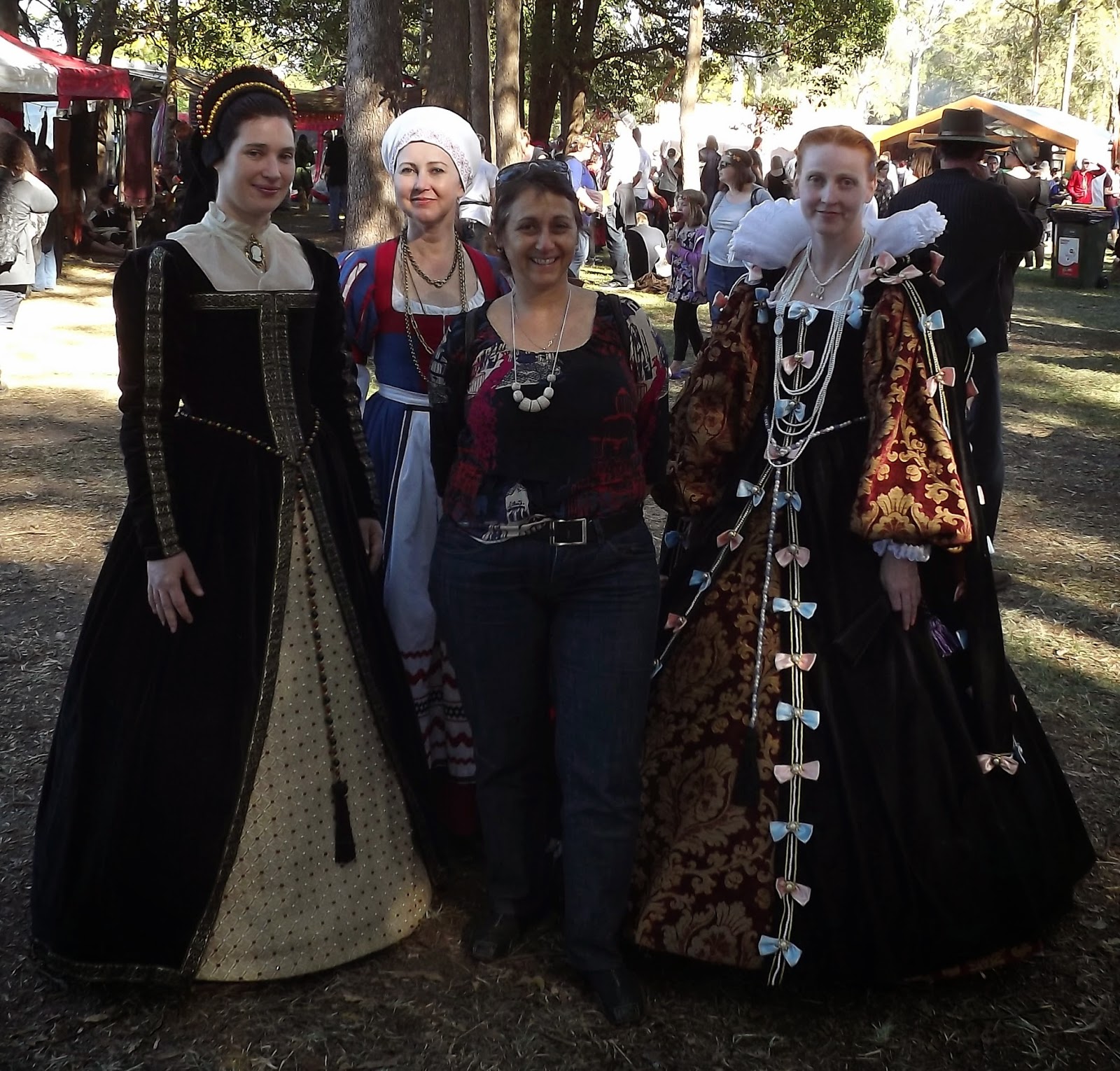 More costumes (and me with my recent New Look knit top).... see there is sewing in this post. Just behind us here, there was a stall selling lots of bits and bobs for costumes. You know buttons, clasps, cording, braiding etc. 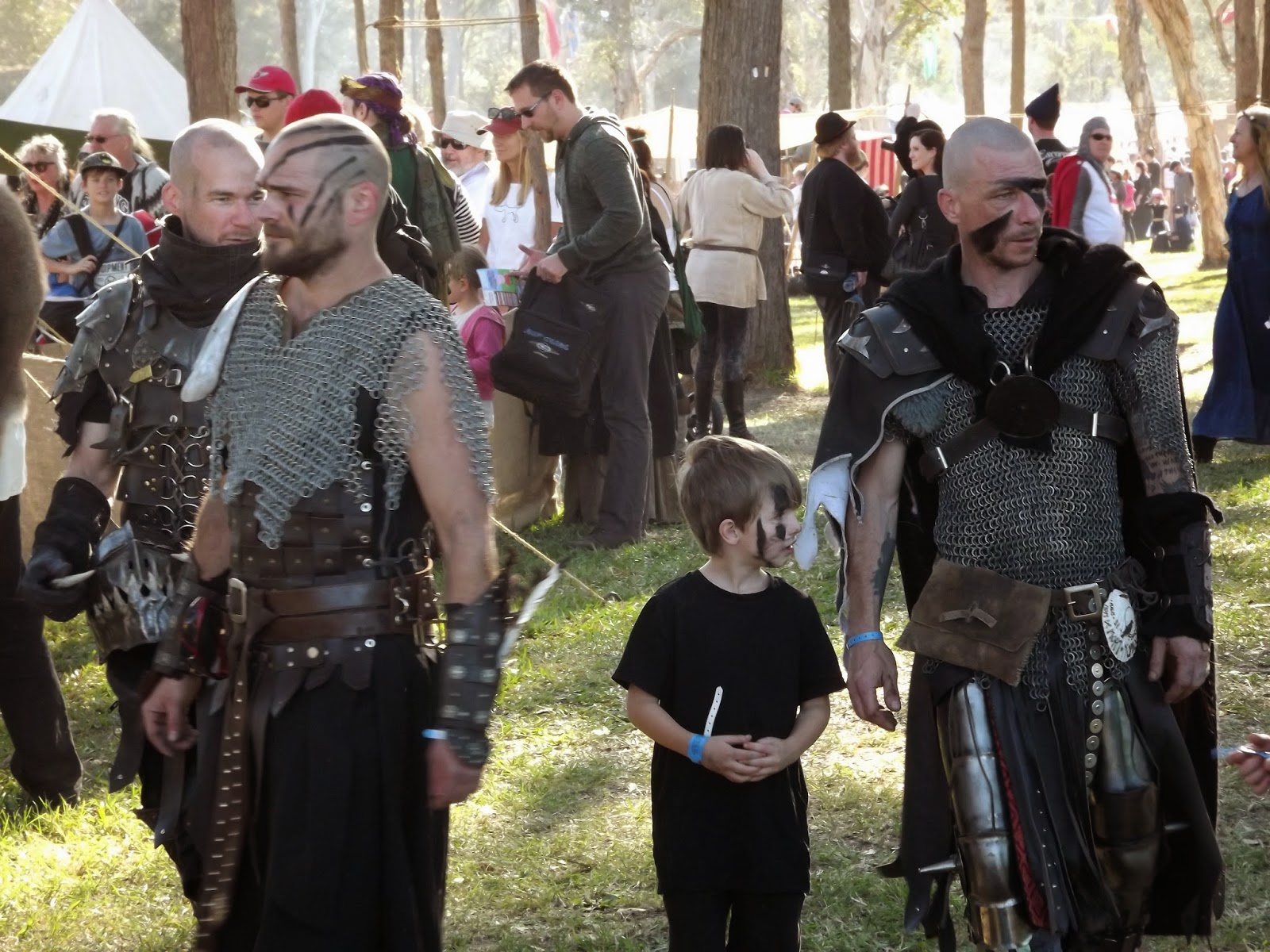 Everyone gets into the action... when these guys came past, I felt like I was in a movie production! 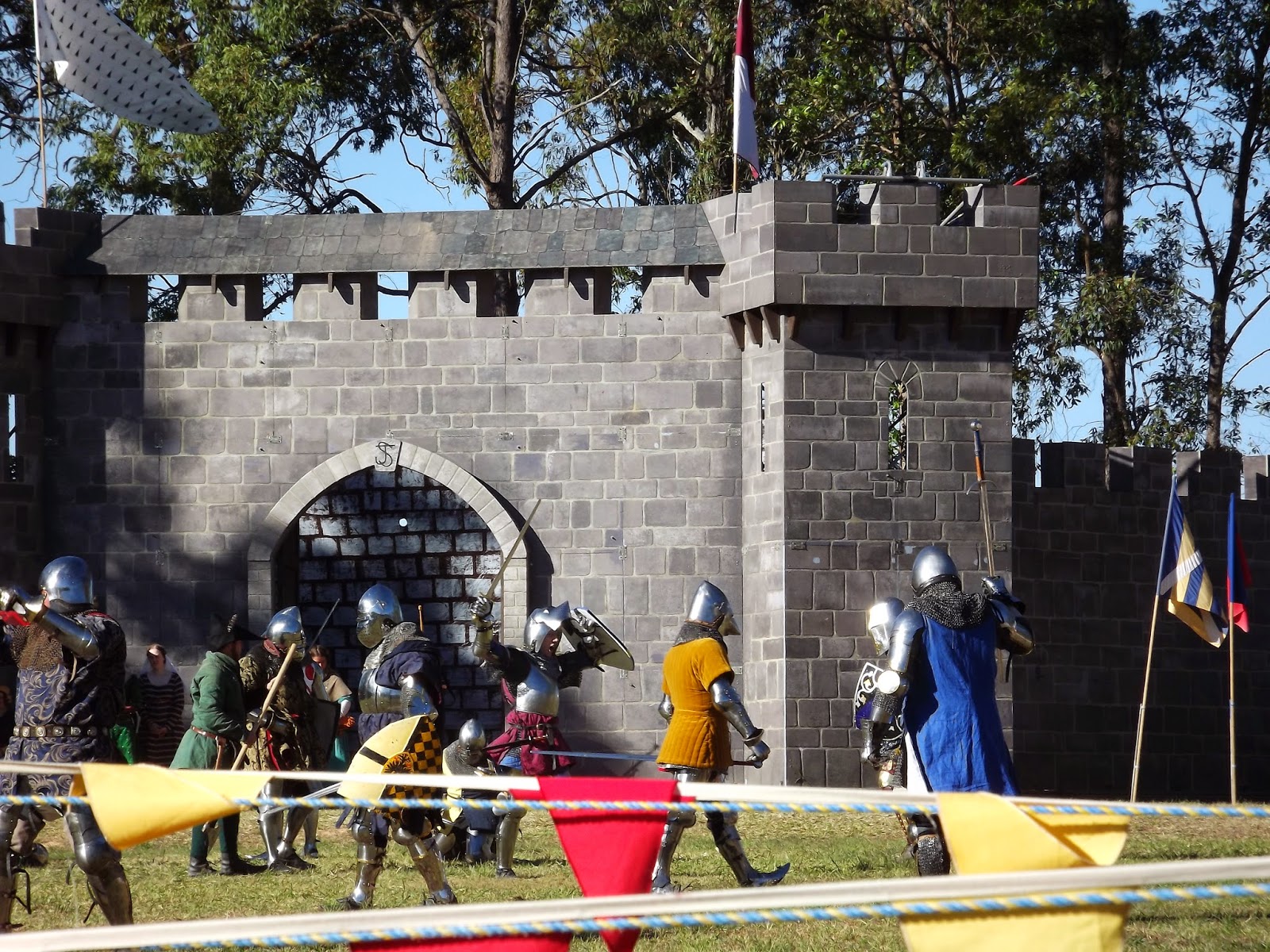 The festival is so established that they have their own castle there permanently for their knight battles - there was even cannons going off, nearly giving me some nervous types heart attacks! 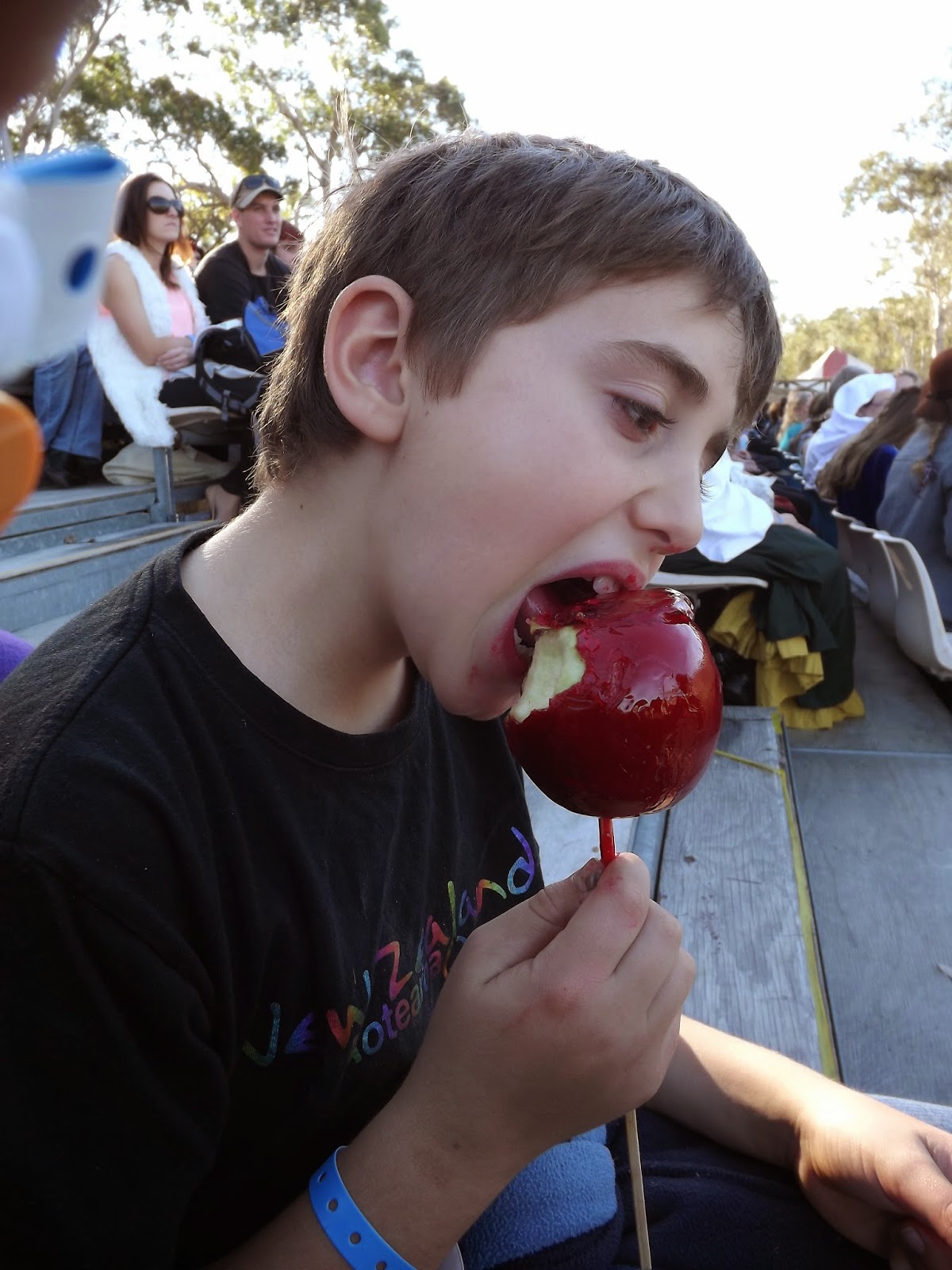 Lots of treats... we had non alcoholic mead and cool teas. There was plenty of food and it wasn't "ha, we've got you over a barrel" prices. It was well priced. 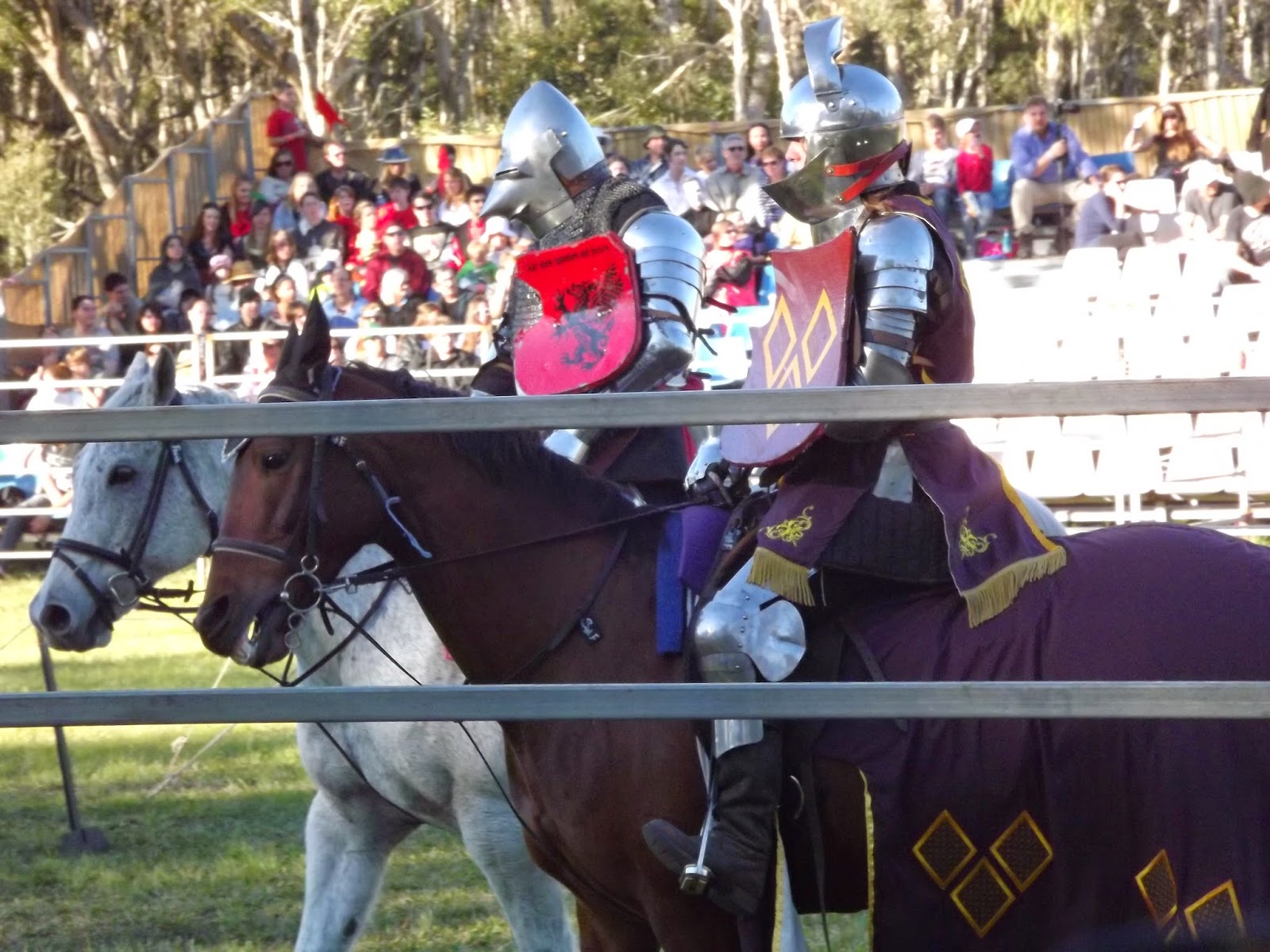 Entry was well priced too and for $4 extra (per session) you could watch jousting!!! I forgot to book it online before we went, and just got the last of the tickets for the last session on Saturday. It was great fun and there were people jousting from New Zealand, Canada and the US as well as interstate. 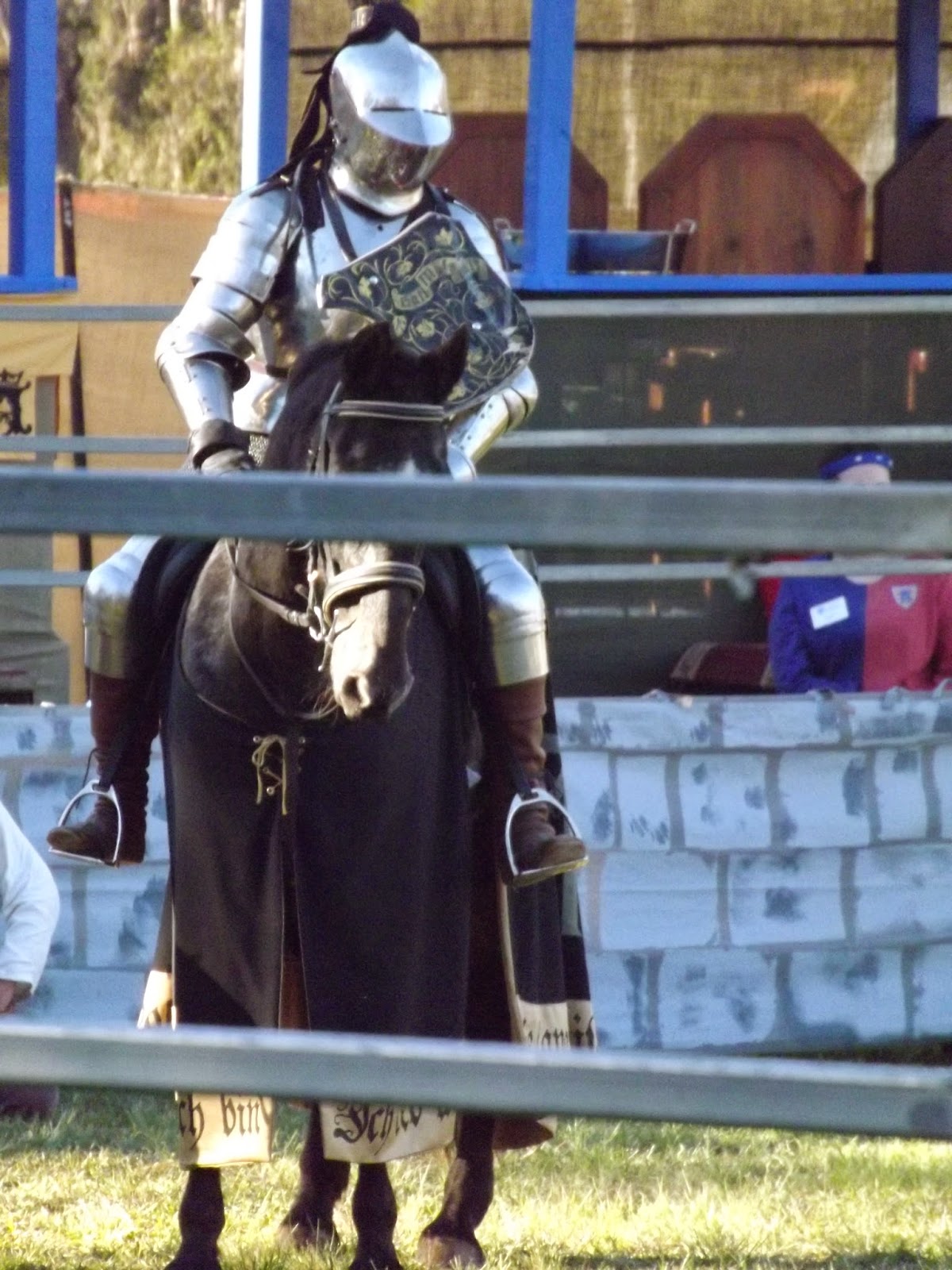 If you live in/around Brisbane, or you are visiting next year, try to get to this festival. There was a relaxed, friendly, inclusive and inviting atmosphere. The grounds are very forest like, (the weather was magnificent) there are purpose built stands for the jousting and displays of action things are going on all day. Oh, due to the very short pocket bags in my jeans, I lost my phone and a short stop at the security tent and there it was. A great day. Have you ever been?

More t-shirt sewing has been done.. that'll be the next post.

October 25, 2012
Has anyone used Lekala patterns? There are some seriously great designs there and they are so cheap and they fit to your own size. I mean look at those dresses... I love that one with the folds and that top jacket is just dreamy. The coat at the bottom - just simple clean lines. I'd love to hear if anyone other than Tanit Isis Sews  has made any I'd love to hear how it went. Oh... I have my last lecture and tutorial for this year tomorrow and in two weeks my first (of four) exams... but on the 13 November at 7.30pm I am finished for this year!(But who's counting??)
17 comments
Read more

February 02, 2020
Hi, Happy New Year! We've been back from our trip nearly 3 weeks and no sewing has been done. It rained a lot while we were away and the grass in our back yard went from brown and crunchy quite literally, to green and lush but long. The grass has been cut 3 times already and needs it again. So, as I haven't any sewing to report, I thought I'd talk about how some things have proved their worth. Firstly,   the couch covers  I made last April for my old couch. I made these covers very cheaply. The fabric was $4 per metre and a very light colour. Before I made them I cut a test piece and marked 10x10cm to throw in the wash to see how it would wash and if it would shrink. It washed well and didn't shrink at all... good old synthetic. I just took the cushion covers off to wash them this weekend and I'm happy to say they have washed up perfectly. They haven't faded over the last 9 months although I noticed a light stain that didn't wash out but when I do
1 comment
Read more

Special silk dress and a 50th

May 16, 2020
In 2003 I made this Burda dress (6/2013 #105).  I've seen this pattern as an envelope pattern about 6 months ago so look out for it if you like it (although I know it was old and probably out of print). It wasn't a style I thought would suit my pear shape, but I'm surprised how flattering I think it looks. I made it out of this nice quality polyester which I picked up at a Brisbane Spoolette's High Tea and I really love it still. It's makes me feel great when I wear it.  A few years ago (ok many - 2012 in fact) my beautiful friend went to Vietnam and thought to bring me some silk! What a friend. She has amazing taste and bought me 2 1/2 metres of a white and floral satin silk. For the first 5 years after she kept asking me if I'd made  anything with it, and in my head I had made about 100 things but nothing was quite right. She stopped asking then.  T ruth be told I wanted to make this same Burda pattern but decided in my head it wasn't enough
6 comments
Read more